Howard Creek Ranch is named after Alfred Howard who came to California when he was 12 years old. Alfred and his father rode to the ranch land on horseback in 1867. He later bought out his father and acquired many hundreds of acres through land grants after the Civil War. Alfred originally named the creek Stoney Creek but everyone else called it Howard Creek. and the name stuck of course. 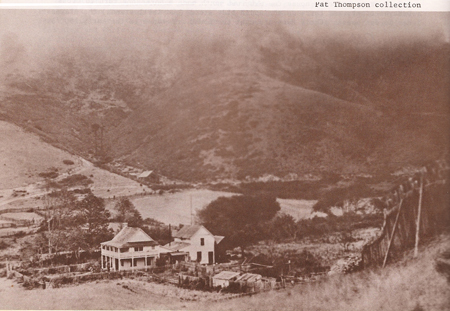 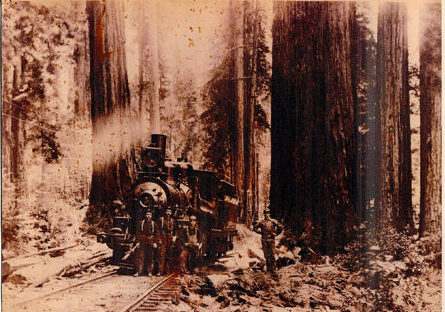 The farmhouse was built of virgin redwood and consisted of two houses back to back with a third identical structure on the East side (probably holding wagons, tack and other horse related gear). This mimicked a style frequently seen in Maine. Many of the earliest settlers of the Mendocino Coast were from the Maine coast. The farmhouse was finished in 1871 and many other additional large buildings were rapidly built with massive redwood beams. Hundreds of men hurried to the Mendocino Coast from the gold fields to help with the logging of the newly discovered redwood forests.
The land was rich in gigantic redwoods. One tree would furnish enough wood for one or more houses. The earth was also rich for growing crops and livestock thrived. The terrain was lovely with hills and valleys. Creeks were jumping with king salmon and trout. The forests were alive with game.
The biggest problem was isolation. A trip to town took days and was quite an ordeal. It was extremely difficult to move anything in or out of the area. The first settlers rode horseback along the beaches at low tide. To go anywhere required a sure-footed horse and an intrepid horseman or woman. After the first dirt roads were developed, the stagecoach was right behind. While not an official stagecoach layover, many a traveler stayed the night at Howard Creek Ranch.
The Howard’s were some of the earliest settlers to the Westport area. The Howard Creek Ranch Farmhouse is probably the earliest structure still standing. Many men flocked to the coast after it was discovered that redwood could be chopped down (with a great deal of muscle), 16-foot long handsaws, and a “steam donkey”. The redwoods were milled on site and moved with the help of a steam fueled train on a narrow gauged train track, and shipped to San Francisco from a little “dog-hole” port (not really a port), but landings, where ships would drop anchor and pick up lumber via cables and chutes.
Howard Creek Ranch moved it’s redwood to Union Landing a mile or so north of the ranch and a little spit of land that stuck out into the ocean further west than the surrounding area. This landing would fill up with lumber including railroad ties as they were in great demand to help build the transcontinental railway. All this was hopefully accomplished before a storm would smash the ship into the many large rocks in the area. Life was rugged and risky. One good storm could wipe it all out.

Alfred Howard married Missouri Lavina Cook and they had seven children, the first four dying before five years old. All were of course born at home. There is a gravestone in the family plot in Westport, where one of their young sons is buried and the gravestone quotes his last words “Look Ma, I can see the angels coming.” Definitely a tearful time. Despite all of the tragedies, their last three children survived and prospered.

Lucy Howard, the eldest surviving daughter, wrote her name in her upstairs bedroom windowpane in the wave of the glass. She had become engaged to Edson McFaul, a neighbor boy from “Union Landing” down the road. The glass pane has survived over a hundred years and can still be seen in “Lucy’s Room”. However, her 2-year-old great great grandson did almost destroy it during a recent visit with his exuberant banging.
Many young ladies tested their diamond by writing their name in the window glass (which at the time was quite expensive and precious). If it worked, their fiancé had given them a real diamond ring, if it did not write in the glass, they themselves had received glass.
Many of the earliest California history books labeled an extraordinary number of new settlers as coming from Missouri as that was the last place they had been prior to setting out for California. However, the high percentage of people coming from Missouri was misleading, but Missouri Lavina was definitely from there and left her mark on the construction of the Howard Creek farmhouse with the addition of wrap-around balconies. This added a wonderful feature to the New England style structure.
Life was hard on the land. Many, many men came to the west to make their mark, but for years, Mrs. Howard was the only white woman to live in this area (according to her diary). This, of course, leads one to ask if there were Native American women here and how they inter-reacted, but we have no answers. At one time, there were 60 men employed onsite in various aspects of logging and ranching.
In the early years, the Howard’s were completely self-sufficient. They grew their own food, sold potatoes and peas as crops, raised cattle for beef and milk, cut redwoods and milled and sold lumber.
In 1909 the Howard family sold to the Thompson family who were from Washington County, Maine. The Howard’s were buried in the Westport Cemetery. The Thompson’s were also industrious and added many more hundreds of acres to the ranch. They continued redwood milling with a bunkhouse in the canyon, which also contained a mill and various outbuildings and a narrow gauged train track that ran from the mill to the landing on the bluff with a spur through the old, enormous locomotive barn where the engine could run in for repairs.
The Thompson’s raised short horn Durham cattle and Rambouillet Shropshire sheep. Ira had accumulated 1500 head of sheep when he sold them in 1925. One year he made the local Beacon newspaper by the quantity of wool he sheared and sold. There was definitely a lot of money to be made in wool production in the 1920s, but it was also an ordeal to shear that many sheep. Now there is no market for sheep wool. 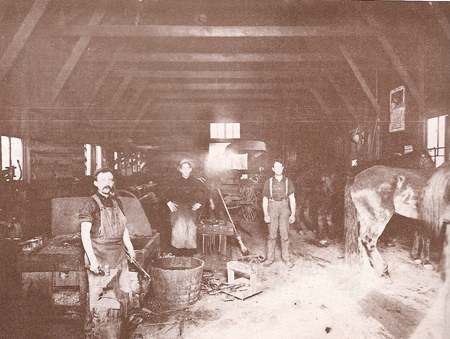 Ira’s brother Les had a blacksmith shop at Howard Creek starting in 1910 and that made the ranch almost self-sufficient. Ira Thompson was a true wheeler and dealer. He bought the old Gordon Place (now De Haven Valley Farm) and added that to his holdings which by then equaled around 2000 acres. The Thompson family held on to the land until 1971 when a large real estate development company purchased it. There is a small hillside Thompson family cemetery that is used by fishermen to triangulate their location by the white of the fences.
Charles (Sonny) Grigg arrived in 1972 and found the buildings incredibly rundown. Virgin, old-growth redwood is incredibly durable and long lasting. He became the caretaker and chanced to meet Sally Lassalle who was visiting the area in 1973. They fell in love and bought the original homestead area in 1974 plus sixty acres and turned it into an Inn in addition to continuing ranching. The rest was divided into large acreages, the three miles of ocean frontage was given to the California State Park system to hold for the people of California to protect it for them always so that all could enjoy the magic and wonder of the incredible coastline and its magnificent beaches. Sally and Sonny’s story is an incredibly long colorful one in itself. Come to the ranch and see for yourself. Thank you for visiting us at Howard Creek Ranch.